We caught up with the 32-year-old earlier this week to discuss her preparation for the event and her family background in cue sports.

Your brother Michael Judge was a well known face on the World Snooker tour for 19 years. Did he inspire you to take up the sport?

“Our uncle Fran had a snooker table in his house so as kids we learned the game. I first held a cue when I was eight or nine and he taught me all of the techniques as he did for Michael. I went through stages of playing a little and then giving up as you do as you get older. Watching Michael was always an inspiration and as a whole family we all had a bit of talent; even my two other brothers Eugene and David could hold a cue and I always played with my cousin Peter who was my age.”

Why did you stop playing and what made you decide to come back?

“I gave up playing seven years ago as life just got in the way and I never really gave myself a proper chance to reach my full potential. During the last couple of years I saw Michael back playing on the Irish amateur scene. Last season I went to Carlow to watch his match and I got the itch back to take my cue out. I asked Michael for a game in April this year and when he saw me cue he said he could see a lot of talent in me and advised me to stick it out for a couple of seasons and try and reach my full potential.

“Hearing that from him really inspired me and also being able to play alongside him so to speak is great. So we decided to get two new cues as his one he had for years and needed a fresh bit of wood. I then started practicing hard and entering as many competitions as I could.

“I also play in weekly flyers in Celbridge and Spawell with Cathy Dunne, another talented Irish player. It’s great to have a few women giving the lads a run for their money.”

“Yeah I played in first ladies Irish competition and I’ve never gotten the better of Michelle Sherwin before as she’s been unbeaten in over 10 years. We’ve always had close matches but she has always had the upper hand so it was nice to come out the winning side.

“The 71 break was my highest match break since I’ve been back playing this year. I’ve had 50s and a few 40s but was nice to have a frame-winning break and hopefully it’s the start as I’m still looking to get my first century match break.”

You will make your debut on the WLBS tour this weekend as you entered the LITEtask UK Ladies Championship at the Northern Snooker Centre in Leeds. What made you decide to enter and what are your expectations for the event?

“I decided to enter because I want to compete with the best women in the world and no better place to start than in Leeds. I’m going to go over and enjoy it and see what happens. I’m not going to have great expectations or going to be putting pressure on myself, I have only been back playing a few months so it will take time to improve, but I’ll give it a go and see how I fare.”

What would you say are your greatest achievements in snooker so far?

“I suppose reaching the last 16 of 2016 European Championships and the final of the 2016 Irish Ladies Championship. Also my victory in the first ladies ranking competition of the season in Ireland, starting the season as Irish ladies number one would make any girl smile!”

What tips would you give other girls that want to start with snooker?

“I would say to play with better players, male or female. I will be entering as many competitions as I can as even if I keep getting beaten, it won’t matter because you learn more from a defeat than a win. The only way to improve is to play against players of a high standard. I often practiced with my brother Michael and Philly Browne and that helped my game a lot.

“Also to find a good coach if possible and make sure you know all of the basic techniques (stance, bridge, back arm etc) and practice proper routines. If you have some natural talent then it will all come together.”

Do you play other sports besides snooker?

“Yes I’m a recently qualified fitness instructor. So along with snooker fitness is another passion. I specialise in weightlifting and follow a healthy diet daily. I think snooker is a physical as well as mental sport, so looking after yourself physically is very important. The combination of both go well together.” 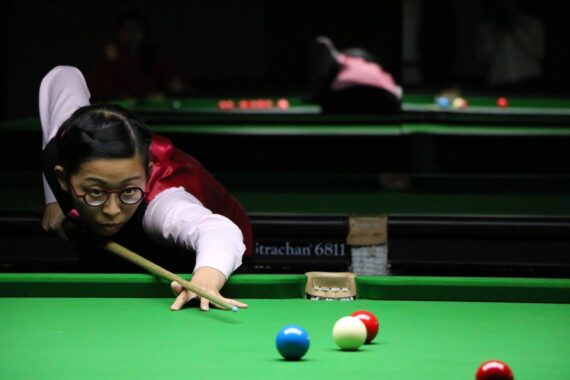 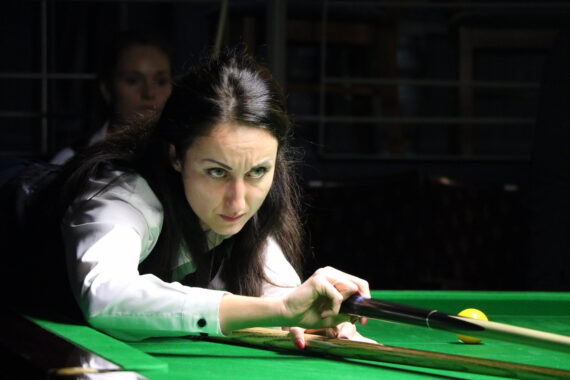